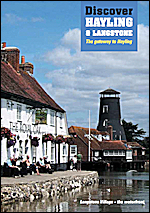 Read the booklet about
Langstone, one of the Discover
Hayling series

A Brief Introduction to the History of Langstone

Two hundred years ago Langstone was a harbour side hamlet consisting of about a dozen houses, three mills and The Royal Oak Inn.

In 1801 Thomas Pennant wrote in his 'Journey from London to the Isle of Wight': Langstone is a sort of port for small vessels which come up the shallow estuary and there discharge their cargoes. Certainly during the 19th century a variety of goods was being unloaded at Langstone, including seaborne coal from north-east England, and in 1845 the Hampshire Telegraph stated that the current traffic at the quay was very considerable not withstanding the disadvantage of cartage from Langstone to Havant. A trade in coals and goods alone is now carried on at Langstone exceeding 7,000 tons per annum. As late as 1912 the Little family was receiving deliveries of manure from the west country and they worked their gravel, sand and ballast barges until just before World War Two, with the wreck of Langstone still being visible by the Old Mill.

In 1817 Rev. Walter Bingley described Langstone Harbour's Fishery as being formerly a great resource to the poor but now on the decline. Its chief produce is being carried away by stranger fishermen before it reaches maturity, leaving to the native fishermen only a scanty subsistence. The oyster is equally scarce, as the brood are caught up by large dredging boats and deposited off the Mother Bank, where they remain till they obtain a sufficient size for the epicure.

A century later Kelly's directory for 1915 shows a total of sixty-one dwellings in the whole of Langstone, compared with about five hundred properties today.

Langstone may be termed the sea front of the town [of Havant]. The toll bridge leading to Hayling Island is at the far end of the village, the toll for motors being 8d return and for pedestrians 1d return. Just below the railway halt is Langstone Towers which has a private chapel attached and is now being used for a Rest Home [and Red Cross auxiliary hospital] for wounded sailors and soldiers. Beyond the Royal Oak is an old water mill and the remains of what was once a fine brick-built windmill. To the right of the Quay is the Coastguard Station. In the harbour is held annually a very popular regatta.

Today the historic core of Langstone is a picturesque conservation area, containing sixteen listed buildings, including terraced cottages, the Old Mill and the two public houses. The Langstone Residents Association is fortunate to include two more conservation areas in its membership, one at Mill Lane and the other at nearby Wade Court, where the tower and east and west wings are also listed.

Enquiries - Any local or family history queries relating to Langstone may be sent to historian@langstone.org. We would also be delighted to accept original or scanned copies of historic photos for our archives.

The Spring Arts and Heritage Centre has local and family history researchers who can help you by appointment. See http://www.thespring.co.uk/heritage/genealogy-history/

St Nicholas' Chapel, Langstone High Street, is now open for a trial period from 10 a.m. to 3 p.m. daily, during term time. The LVA has provided several local history boards to add interest and a history of the chapel is on sale for 50p. See photos of the chapel interior on our Gallery page.